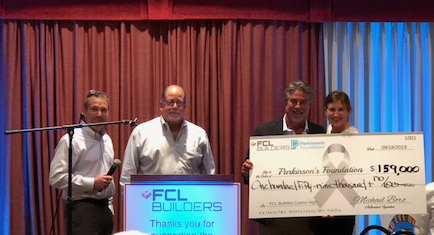 Addison, IL – October 8, 2019:  FCL Builders recently announced the results of generous sponsorships and donations from trade partners and attendees during its annual Casino Night event at the Medinah Shriners Hall in Addison, Illinois on September 18, 2019. The event raised over $159,000 in donations for the Parkinson’s Foundation, the organization dedicated to making life better for people with Parkinson's disease by improving care and advancing research toward a cure.

“Each year FCL Builders selects a charitable cause that has affected our employees and their families. This year, we selected the Parkinson’s Foundation, as they help so many with this devastating disease,” stated Chris Linn, Senior Vice President at FCL Builders.

The evening’s speakers expressed the importance of supporting the families and caretakers of those with Parkinson’s. Chris Linn shared the story of his family’s own experience and FCL’s history fundraising for the Parkinson’s Foundation. Allison Liefer, Development Director for the Parkinson’s Foundation Greater Illinois Chapter introduced Tom Manak of Glen Ellyn, who shared with the group the daily struggles and victories from the perspective of a primary caretaker of someone with Parkinson’s disease.

In previous years, FCL Builders’ Annual Casino Night raised $63,810 for the Les Turner ALS Foundation, $122,000 for the Alzheimer’s Association and $140,500 for the Construction Industry Alliance for Suicide Prevention. A supportive group of sponsors, including table sponsor ATMI Precast, surpassed the previous years’ efforts, for a record-breaking fundraiser in 2019.

“We are very appreciative of the support we have received from our sponsors and the FCL Community this year, and we look forward to carrying on this annual tradition,” said Linn.
SEE MORE NEWS